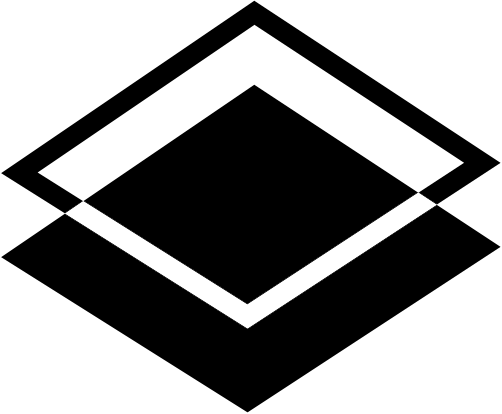 Subpixel Space
writing about
Define Concepts From the Behavior Up

In an eponymous blog post Twitter user @snufkin_snus defines what he calls “ideological pointers.” Ideological pointers are “concepts [which] have a plain reading that’s supposed to be a pointer to a sophisticated set of concepts.” He uses “toxic masculinity” as an example.

In feminist discourse, this term points to the complex of concepts and social systems that “enable and sustain a form of masculinity not conducive to ‘goodness.’” “Toxic masculinity” is not synonymous with the whole complex of systems; it doesn’t even have synonymity with “patriarchy.” But when the term is used in writing without specifically defining and talking about those systems, it introduces confusion and risks the reader assuming that the writer is simply calling all men toxic.

Snufkin’s post goes on to suggest that when using ideological pointers, we should strive to rigorously define the behavior we are actually talking about.

Rather than use potentially harmful language like ‘toxic masculinity,’ define our goals (for example a greater emotional freedom between men) and map the progressive / regressive language onto that. “That’s toxic masculinity” becomes “seems like you’re engaging in regressive behaviour, my dude. Want to talk about it?”

Here’s another example. When I wrote about authenticity I didn’t anticipate that it would be so hard to get people to change how they felt about this word. People strongly resonated with the post, but it was also hard for them to suspend their own personal definitions.

“I get what you’re saying, but don’t you think it’s important for people to be authentic?”

Hipsters and 20th-century anthropologists, an interesting take on the value of authenticity in 2018. But to archaeologists, provenance and authenticity will always be important:https://t.co/d1c1qSpvpw

These are perfectly valid uses of the word “authenticity,”” but they refer to totally different definitions of the word. I was concerned exclusively with the understanding of authenticity as A) indicating something is not a commodity, and therefore, preferred. These comments were instead concerned with:

B) authenticity as an evaluation of a person behaving in a stable way, as in “being authentic to oneself.” (This one came up a lot, which is not surprising; as humans we strongly desire that people behave in mostly predictable ways).

C) authenticity as an evaluation and consensus on the provenance of an item.

These other definitions of “authenticity” are valid because lots of people agree on them and use the word in these ways. That’s why any definition is valid: a large number of people use the same word to mean roughly the same things. But in my post I was trying to show that the definition of “authenticity” was changing, and that caused problems. Why did people raise so many problematics based on totally orthogonal definitions?

The issue is that people tend to look at a word as if its semantics are intrinsic. Here’s a chart we can use to think about how people typically interact with messy conceptual complexes like authenticity. 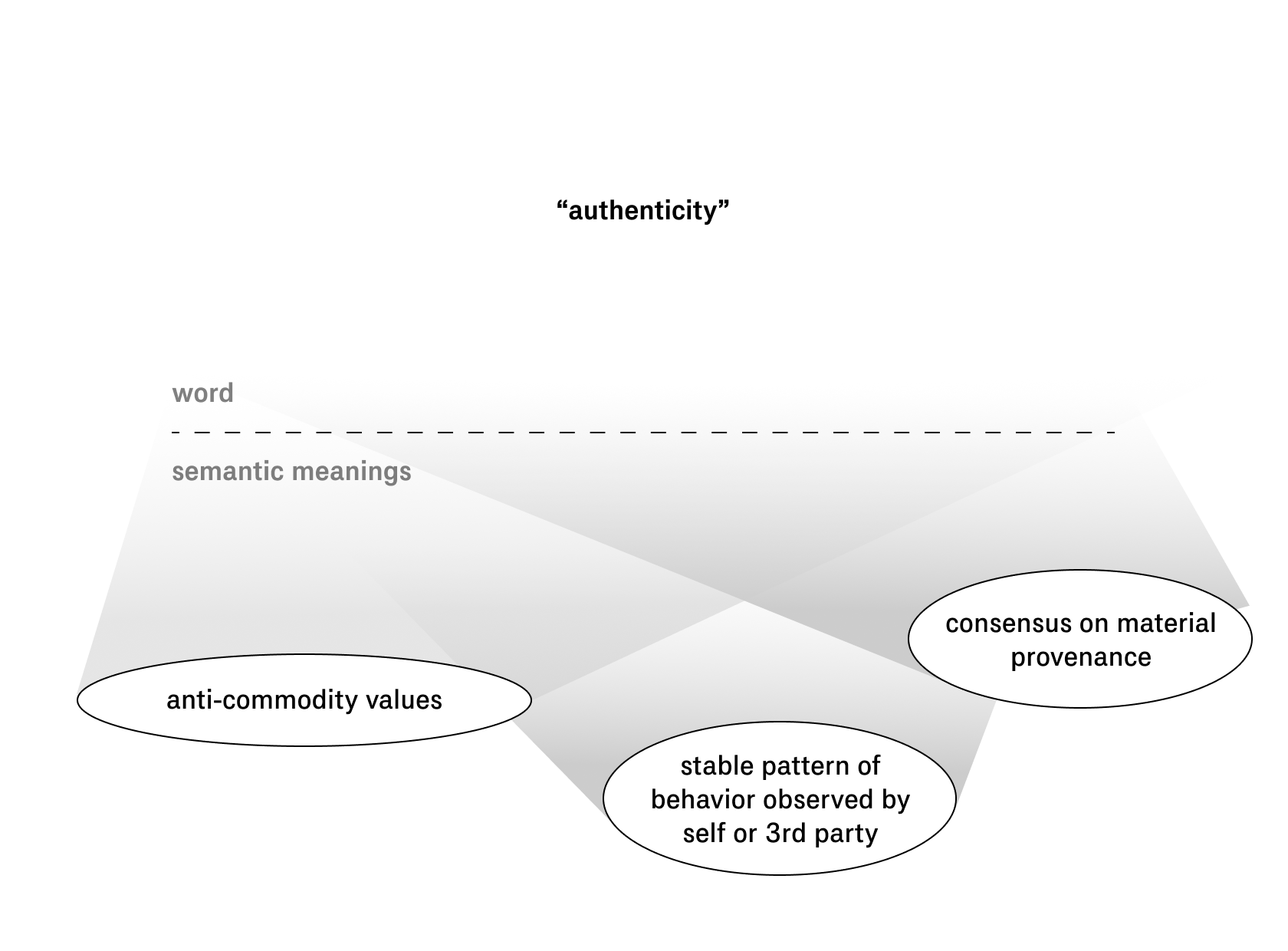 When people talk about concepts, they view the word from the “top down.”” They see a fuzzy set of loose meanings and associations they already have with the word, including their own idiosyncratic ones. They do not construct the meaning of the word from the behavior up. They just hit the blurry top layer and “come up with” the meanings that seems appropriate for the context.1 If the word has two clear definitions that both might be appropriate, that can result in a question like this: “do you mean [word] in the sense of [A], or [B]?”

“Authenticity” is an ideological pointer that points to several different definitions, definitions which for most people are largely underspecified. To make matters worse it’s a topic people tend to have strong opinions about it despite the lack of specificity in their understanding. In practice this means that the clarification question never comes, and I get stuck explaining the differences to people over and over again.

That’s not for lack of trying, however. What does defining something from the behavior up look like? In After Authenticity I took great pains to point out that I was not simply making up authenticity “definition A” from scratch. Instead, I showed that:

In short, I pointed out that there exists a huge body of behavioral evidence for the existence of this particular value system. Then I proceeded to show how that value system changed and became less important over time, as a result of socioeconomic and technological disturbances. The word “authenticity” was frequently invoked when these questions of commoditization arose in each of these cultural systems; in other words, based on these observations we can make a strong argument that the word “authenticity” represents anti-commodity values. So all the while, I constantly referred to this value system as “the authenticity value system.”

This was the first time I tried to write about the relationship between a word and the values it represents, and it was quite difficult. You can see me struggling to describe that relationship in this convoluted paragraph:

From After Authenticity
Go to text→

What I was trying to get at is this: it is not because people believe in authenticity that they practice these values; it is the structured pattern of mass behavior and speech that makes it valid to use “authenticity” in this way to begin with.

This same insight needs to be taken as a first principle for any writing that discusses a value system, ideology, aesthetic, culture, or pattern of mass behavior that is named and represented by a word. These conceptual complexes are not fixed or “given” and certainly not by words. They are large-scale, relatively stable, but living and evolving patterns of behavior and discourse.

The academic literature on “hipsters,” for another example, is essentially about how a particular set of behavioral and discursive practices came to mean and be referred to as “hipster.” As I showed in in my essay, it is possible for the meaning of a word to diffuse and change right under our noses. It happens when those patterns of behavior change. Along the way I explained how this applies to the word “hipster” too:

“Authenticity” underwent a semantic expansion. . . . by 2012 it was finally possible to call just about everyone a hipster. The development of the authenticity aesthetic made it possible for the mainstream to participate in the most outwardly visible ritual of hipster behavior: authentic consumption.

Journalists trying to practice cultural criticism are the worst offenders. Just look at the arguments around the recent Vox article about “accelerationism.” The piece is a hot mess of both idiosyncratic top-down definitions (“it’s called ‘accelerationism,’ and it rests on the idea that Western governments are irreparably corrupt”) and misleading, selective behavior-up definitions that ignored the significant history of accelerationist thinking (“Earnest explicitly borrows a clearly accelerationist idea from Tarrant’s manifesto: the idea that using a gun in an attack could hasten the state’s collapse by stoking conflict over gun control”), choosing only to focus on the behavior of a few individuals.

Ironically by doing this, the author only contributed to further needless linkage of white nationalism and acceleration. It would have been less dangerous to leave the topic be. Being specific about what behaviors constitute a word is crucial in a world where niche ideologies are cropping up by the dozen.

With topics like “authenticity” and “acceleration” we can see the type of problem that comes up when we don’t carefully define our terms starting from the observation of behavior and practices of individuals. Here are some other words that deserve to have the behavior up treatment applied to them in every context.

And what about new terms? The entire basis of the joke that is the trend forecasting industry is observation of behavior patterns and attempts to slap proprietary names on them. Be careful when playing this game. Defining a concept is powerful, but as many better writers than I have learned, definitions don’t last long once they hit the public. When K-HOLE coined “normcore” what they actually meant was very same ethic of “post-authenticity” I wrote about in After Authenticity. Now it means wearing dad jeans.

Language is already a pernicious thing whose deployment strictures are but a loosely enforced and constantly eroding consensus. The written word, on the other hand, is totally lawless. Words are a wild west which nobody can police and enforce. We are therefore each responsible for using words carefully and thoughtfully. If you are a writer, or god help me, a prolific tweet threader, I hope this post has illuminated a way to be more rigorous with language and definitions. Take it from me, defining cultural complexes from the behavior up has great benefits for clarity of thought, cogency of argument, and prevention of reader confusion.

If blogging wants to level up and produce real, non-bullshit knowledge, if it wants to contribute to clarity instead of confusion, it needs to define concepts from the behavior up. We should be very careful not to treat mass patterns of behavior as if they have object-level properties. They do not! They are simply representations.

Newer: Building for the Culture
Older: 3 Cuts on Brands